For the Joy Set Before Us 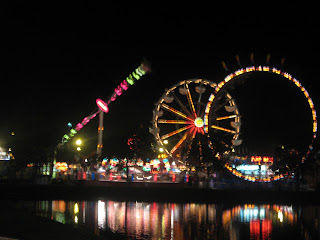 I had an experience Friday night that I think will stick with me for awhile. Sandy and I were doing our normal loitering and eating at the fair when I found out that my brother was also there alone with his 4 children (ages 10,8,5, and 3) and a friend of the oldest. I immediately went into sister mode and we went to find them on the midway in the Kiddie section. Upon getting there, I realized why I stay away from the section: it’s too loud and there are too many people, especially on a weekend like that. Of course, the kiddie section is tame compared to the rest of the midway. The older two children, Lanier and her friend, rode several of the rides while Louis, Sandy and I kept watch. At that point, my job was to keep the non-riding children from putting their mouths on the railings, and to keep myself positioned between them and the lake.

But the little ones finally did become antsy and so Louis promised that they could ride the merry-go-round – which was on the other side of the amusement park! And so off we went. Louis put the 3 year old in the stroller, with the 5 year old holding on to the handle, the older girls held hands and stayed between Louis and me, I held tightly to the 8 year old, and Sandy pulled up the rear – all very intentional placement.

The deeper we got into that pit, the more my skin began to crawl and the sicker I got. Very literally. At one point, there were huge tears in my eyes and I thought, “I’m going to lose it at any moment now.” (What idiot cries at a fair? Me!) From every side someone was calling out to us trying to pitch their wares, sell their toys. Some would even have the audacity to try and put a ball or dart in our hand. Every now and then the older girls would begin to pull away as they looked at all the “side shows,” and I would quickly call them back. And each time there was a loud noise, Leah would react by squeezing my hand tighter. All I could think about was what a perfect picture of the world it was: things/people constantly vying for our attention; trying to pull us away from our charted course. Always offering something more exciting or better. Even as I thought it, Louis turned around and yelled, “This is Babylon!” The only way to make it through unscathed or untouched was to keep our eyes straight ahead on the one leading the way – in this case, my brother.

When we finally reached our destination, I heaved a great sigh of relief and probably offered a quick prayer of thanksgiving, and then I was the fortunate one who got to climb on the back of a horse and ride that old-fashioned merry-go-round with the three smaller ones – and I had a blast! I laughed my head off as the littlest one waved to his daddy and Uncle Sandy time and time again, and then preceded to kick and ride that bronco into the sunset.

We ended the evening with corndogs, fried cheese, pecan pie, and cotton candy while Lee Greenwood sang “I’m proud to be an American” and fireworks exploded in the night sky.

The trip was hard – but the ride and the feast and the lights were worth it! 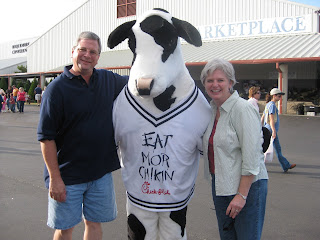 Hanging out with the cow. 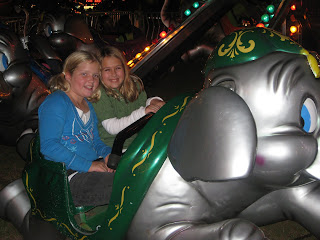 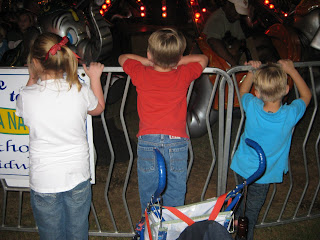 Keep your mouths off the railing! 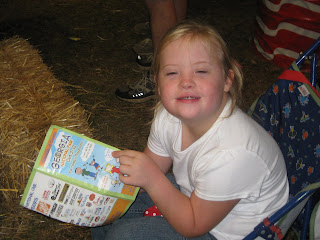 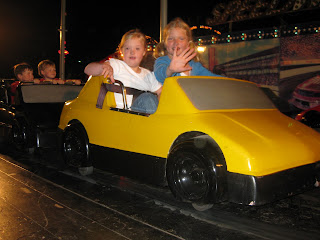 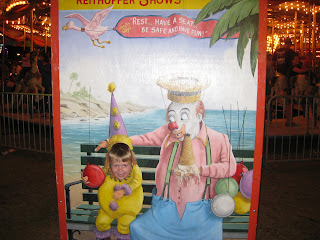 There's a clown in every family. 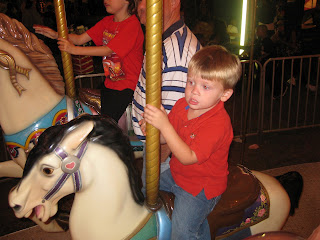 Let's get this show on the road. 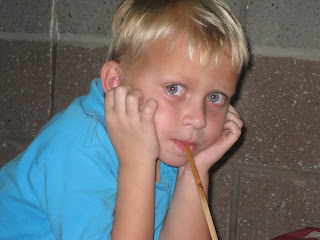 I know there was a corndog on this stick. 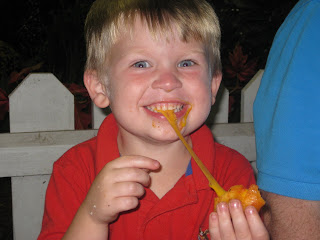 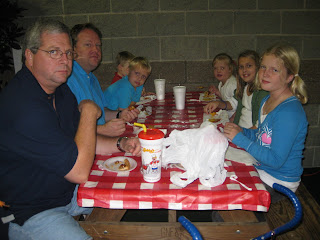 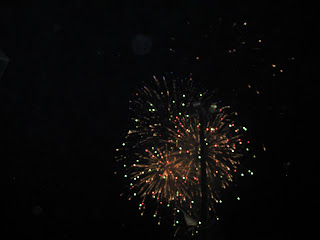 I caught up on your blog today while I took a break at work. Loved the fair and b-day pics! When I have been to the fair—the midway always reminds me of the world as well. For the reasons you mentioned and (at the chance of appearing shallow) from the appearance of the carnival workers. Many of them seem to have a lot of pain, and wear & tear on their faces. Our singles’ group used to have a booth at the macon fair where we would share the gospel. It was awesome, and sometimes challenging when some folks just wanted to grill you on Christian beliefs. But God’s Word does not return void does it? We planted seeds in those cases.

Why in the world do you think that I will never go to the Mid-way? I decided many years ago that Satan's demons reside there. The Spirit in me absolutely crawls when I even think about it. I know that it is a lot of fun for the little ones but OH, how I pray that they stay safe IN EVERY WAY while they are in that devil's playground. Thank you so much for being there with Louis to help him. He is the best father I have ever known. He had the boys out there Friday afternoon when we went and we hung out together until he took them home for a nap.

It sounds as if you had a blast with the best of them. Just wait until you have grand’s and see how you feel about going to the Midway.

looks like dad was thrilled... Glad yall had a good time. This was the first fair I've missed in a while. Well, I really didn't miss it, I just didn't go.

Kinda late with the comment, but reading the blog made me think about Bunyan's "The Pilgrim's Progress." There is the place on the journey known as Vanity Fair and one of the lines reads, "these pilgrims set very light by all their wares, they cared not so much as to look upon them; and if they called upon them to buy, they would put their fingers in their ears,and cry, 'Turn away mine eyes from beholding vanity,' and look upward, signifying that their trade and traffice was in heaven."