How Great Is Our God 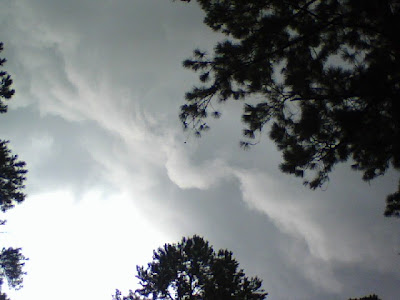 About 4:15, I turned on the radio and the emergency broadcast system was delivering a tornado WARNING to the listeners. My ears perked up immediately when I heard there was a twister spotted in Henderson moving in a northeasterly direction. I knew that meant it was headed for Perry. I let the dogs in the house, grabbed my keys, and headed out the door to the safety of my brother's basement on the other side of town -- picking up my daughter on the way. Several other family members and friends had gathered, but instead of going downstairs, I took my place on the front with my brother and dad, and we watched. I have never experienced more awesome cloud formations in my life. The picture is actually one I took with my camera phone. The difference in the light and dark was incredible as the clouds boiled and churned over us. Chip was rebuking them -- commanding them to stay high (of which I was most grateful), but I couldn't help but worship. God is so awesome in might and magnificent in power. He is indeed worthy of our praise.

If you live in our area or frequently travel up and down I-75 between Macon and Perry, you are aware that the well renowned Café Erotica saw its final days recently. In fact, its razing on Friday morning brought quite the crowd. Saturday morning’s Macon Telegraph saw, not one, but two front page stories related to this noteworthy occasion along with several photographs. It’s not that I’m in disagreement with the closing of this nude dancing/strip joint. In fact, I was all in favor of it. If I’ve asked the Lord once as I’ve driven by, I’ve asked Him a hundred times to deliver those girls out of that pit and to do the same for those customers who would make regular visits there. (To give you an idea of the place, Jerry Springer had even filmed a segment of his TV show here.)

One of the front page stories related primarily the news of the notable closing and pending destruction set in motion by a ceremonial demolition. Chamber of Commerce presidents were present, each celebrating the potential growth and evolution in the area now that the highly visible joint would be gone.

The other story was of Rachel Simms who danced there for nearly four years in the late 90’s. Today she is a happily married wife who has found complete redemption in Christ Jesus and who has one of the most beautiful testimonies I’ve ever read. Two weeks ago she stood in her church pulpit and told her story to not only her congregation but a TV audience as well. At the end, not only did 10 people come forward, she found out that a former Café dancer was in the audience dealing with the same guilt she had dealt with for so many years herself. If you’d like to read her story, you can go to http://www.macon.com/197/story/426951.html.

But why do I write my blog this week on something such as this? Because of the photographs accompanying the articles. They told the real stories. The headline picture was that of a mechanical claw demolishing the “We Bare All” sign. In Rachel’s story, a before and after picture were included of the former dancer revealing a great transformation. And in the main article, there was a picture of the pastor of a very large church in the area pumping his Bible up in triumph. And it just made me sick for some reason.

Yes, victory had come; but it was not in the form of a sign or building coming down. It was in the life of a precious woman who has been to hell and back, who has found complete redemption, and who now tells her personal story so that others might find the same.

I just have a gut feeling that this young woman will touch more lives for Jesus than any Bible pumping preacher could ever hope to do.
Posted by A Cup Bearer at 10:15 AM 1 comment:

What's In Your Closet?

I’ve had my mind on my mind lately. What is it that makes me think the things I think and do the things I do? This was mainly brought to my attention because of the tragedy that happened here in my hometown over the weekend. A father walked into his house and shot his two sons execution style (ages 7 and 10), then shot his step-father and his estranged wife before turning the gun on himself. What makes a man do that? Is it indeed demonic activity or is it a deranged mind? Is anyone beyond such violent activity?

What is in my mind? Where do I have an erroneous mindset? The apostle Paul tells me in 2 Corinthians 11:3 that even if I have a sincere and pure devotion to Christ, my mind can be led astray, lured away by the enemy of my soul. Just before that, he had said to be constantly “fitting every loose thought and emotion and impulse into the structure of life shaped by Christ” (10:5 -- The Message). The NIV renders it, “Take every thought captive to the obedience of Christ.”

So how do I do that? I think I first need to look at the fruit my mind is producing. For example, someone asked me a very innocent question the other day, and I answered it very simply. But then I thought, “Why did she ask me that?” and I suddenly became very hypersensitive. That hypersensitivity was the fruit – but fruit comes from a root, and the root of wrong thinking is always a faulty belief system. So maybe I need to examine my belief system. In this case, I know the root was pride and insecurity or why else would I have been so sensitive? When I produce the fruit of a need to control, it’s a root of insecurity – every time. Perfectionism? Low self-esteem. We don’t simply grow insecure, angry, intolerant, or defensive without something to feed those feelings or thoughts. The feelings and thoughts are just the fruit of an erroneous mindset that has not been taken captive to the obedience of Christ. I am going to behave according to what I think.

This week I am making a concerted effort to take my thoughts captive and make them agree with truth – the truth of God’s Word and who He says I am. It begins with taking an inventory – and I’m not so sure I’m going to enjoy this.