I attended the wedding of one of my son's very closest friends this weekend and in which he was honored to be a groomsman. From the beginning, it has been a storybook kind of romance and engagement. Luke's proposal to Drew even made it on national television! They were married late Saturday afternoon in a romantic outdoor setting at Massee Lane Gardens under huge pecan trees. The ground was sprinkled with rose petals and wild flowers graced the ends of the makeshift aisles.

The bridesmaids and groomsmen made their way through the canopy of trees, and the quickly-turned-shy flower girl was carried in by her father (a brother of the groom). And then, as if on cue, everyone's attention turned to the point of entry and to await the entrance of the beautiful bride. Everyone, that is, but me. I do what I always do. I turned and looked at the groom. Even when my own beautifully arrayed daughter walked through the doors last year to process down the aisle on her father's arm to her soon-to-be husband, I did the same thing. I took a second at that precise moment to look at her man waiting at the end of the aisle. For those who don't, they miss something very special. They miss the ravished look of the bridegroom. That first moment he sees his bride in all her array is quite possibly the most priceless part of the entire ceremony. Most take a quick deep breath, and almost all blink profusely as their eyes begin to water with tears never before expressed. Why? Because they are captured by their bride's beauty.

Oh, indeed, is it not every woman's dream to be captivating to the man she loves? To be beautiful beyond words? To take his breath away?

Paul tells us in Ephesians 5:27 that the believers are the radiant bride of Christ which He presents to Himself without a spot or wrinkle or any other blemish. And I believe the response of Christ is recorded in the Song of Solomon when the Beloved says to his bride, "You have ravished my heart. You have ravished my heart with one look of your eyes." Ravished! Captivated! Stolen! Made his heart beat faster!

I don't know how a man feels about that; but to a woman, it's everything!

Next time you're at a wedding, watch the groom.
Just an ordinary moment...
Posted by A Cup Bearer at 8:38 PM 4 comments:

Laboring on the Rock

When I was much younger, I can remember spending my Labor Days raking leaves or helping in some type of yard work. When I insisted to my parents that it was a holiday, they always insisted the "labor" part meant work. Now that I'm older, I'm on to them. So when my husband said Saturday morning that he wanted to do a little fishing in a spot he found on the Towaliga River in Monroe County, I was all over it. So while he packed his rod and reel and tackel box, I packed my book bag with all my essentials and asked him to throw a beach chair in the bed of his truck.
I can't say I'm a real "woodsy" person; after all, I have this aversion to snakes and black bears. But he was able to drive me practically up to the river's edge, assuring me there were no bears. (Come to find out there are. He also forgot to mention the cougar -- and so I got a quick review about what to do should I encounter either.) But once I crossed over into "Eden," I forgot about what wild animals or slithering creatures might be lurking around the next bush. 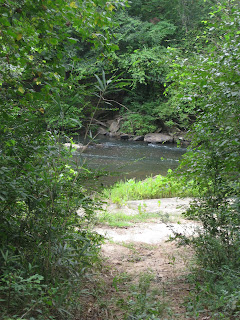 The entrance to "Eden." 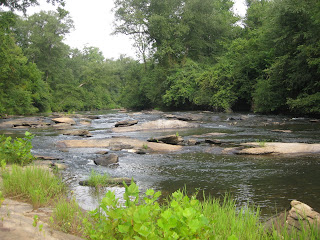 "Eden"
Within minutes, Sandy was off in the distance wading in the shoals and doing his thing -- fishing; 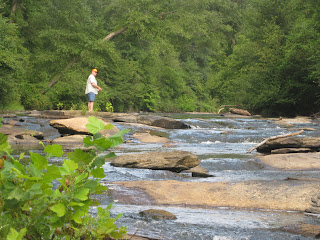 and I was doing mine. 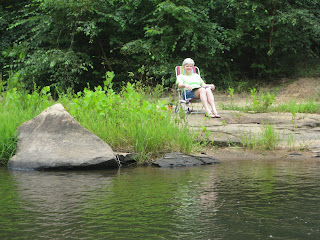 Throughout the OT, God is portrayed as a large rock. For one: The Lord is my rock, my fortress, and my saviour; my God is my rock in whom I find protection. He is my shield, the strength of my salvation, and my stronghold (Ps. 18:2).
One of the things I had included in my book bag was the Sunday School lesson I was preparing to teach the next day: Daniel 2 - which speaks of Nebuchnezzar's dream and Daniel's interpretation. The vision sports an alarming figure of a man that shakes Nebuchadnezzar to the core. It was a dream that covered the prophetic panorama of Gentile history from Nebuchadnezzar's reign unto the forthcoming reign of Israel's Messiah.
But the dream ends with what else but a rock that will smash this statue to smithereens. God's eternal kingdom that is more powerful than any other kingdom ever known or ever will be. The kingdom of Jesus Christ. In that day, every earthly kingdom will be carried away in the wind, and the rock that struck the statue will become a great mountain that fills the whole earth.
Can I just stop a minute and shout "Hallelujah!"?
Whereas I sat on a large slab of rock, there was a taller rock just to my right. But what was so interesting to me was the backside of that large rock. 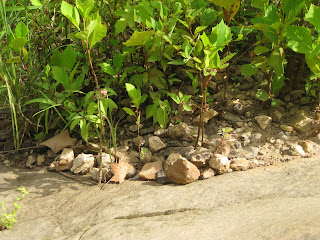 1 Peter 2:4-5a reads, Come to Christ, who is the living cornerstone of God's temple. He was rejected by the people, but he is precious to God who chose him. And now God is building you, as living stones, into His spiritual temple...

As I looked at those stones there that morning on the banks of the Towaliga River, I thought of the church, the believers, you and me, who not only rest on the Rock but are being built in His spiritual temple. Not a church made with brick or mortar, nor one we can enter and sit in comfortable pews, but one made of faithful men and women scattered everywhere who with power can smash this world's kingdoms to smithereens.
You and I are precious stones in the kingdom because the living Rock has said, "Come!" 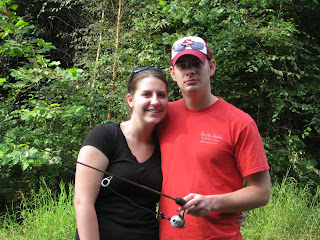 A couple of very precious "stones" who went back with us the next week. 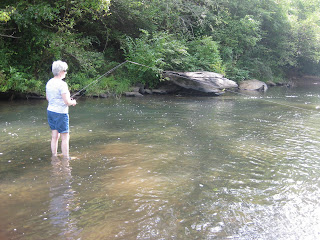 Earlier in the year, at the suggestion of a friend who is a prolific reader and writer, I joined Twitter so I might follow his thoughts on matters of interest. You can imagine my son's surprise when after suggesting I get a twitter account so I could "keep up" with him, I told him I had had one for quite some time. It probably shocked him to know that his archaic mother wasn't completely in the dark ages. Of course, I never check my twitter account as it all comes directly onto my facebook page.

But what has been so interesting are all the notifications I've received from people "following" me. People I don't know. People who don't know me! I received another one just moments ago. And before I get all puffed up about it, this fellow is also following some 487 other poor souls as well. What's up with all of this? I've never "twittered" the first thought! So what are they "following," for crying out loud? It's a little silly if you ask me.

It's also a little scary, because in a way, I think it speaks loudly of our society. We blindly follow that which we do not know as well as that which is going nowhere: the most recent fad; the loudest voice; the newest "prophet." But the truth is that there is one Person and one Person only whom we should follow. His name is Jesus. In fact, He demands it. No less that 18 times in the four gospels do we hear Him say, "Follow ME." And within that context, and that context alone, we are to follow after those things which make for peace and that which is good. We are to follow after righteousness, godliness, faith, love, patience, and meekness. We are to follow in His steps. The question might even be asked, "Would Jesus tweet?" Somehow I think He would. The name "Christian" ("little Christ") was given to believers in Antioch (Acts 11:26) because people saw in them the Christ they followed.

But 2 Timothy 4:3-5a speaks a strong word of warning to all this "following." Paul writes, For a time is coming when people will no longer listen to right teaching. They will follow their own desires and will look for teachers who will tell them whatever they want to hear. They will reject the truth and follow strange myths. But you, keep your head...