I've been thinking of Joseph lately. And why not? It's Christmas. And whereas his name is mentioned many times over in the Gospel narratives, his voice is never heard. However, I'm sure he had his say when his betrothed came to him and told him she was pregnant -- and he knew beyond of a shadow of a doubt he was not the father. Yes, Joseph. The most underrated, under-celebrated cast member of the entire Christmas story. And yet one of the most powerful in my mind. If you were to ask me this morning which Biblical person I would like to meet when I get to heaven, my answer just might be Joseph, the earthly father of our Lord Jesus.

Honestly, I think I already have an example right now in my husband. I think he may be a lot like Joseph, He's honest. He's real. He's quiet ... doesn't say a lot. He is steady strength. And when God speaks to him, he listens and he does the right thing, even when it's hard.

That's Joseph. His story tells us that sometimes what seems to be righteous may not always be right.

Hear that again. Sometimes what seems to be righteous may not always be right.

Yeah. That stings me, too.

Joseph had every right under the sun to divorce Mary. He could have publicly shamed her and it would have been within the law. He could have had her stoned, for crying out loud. That would have seemed righteous. But he chose the hard thing and did what was right. He took her as his wife and subjected himself to every kind of gossip and slander that could come from the "righteous" of his day and that would follow him the rest of his life.

Sometimes what seems to be righteous may not always be right. And Joseph chose what was right.

What about you? What about me? Do we choose to be seemingly "righteous" or do we choose to do right. I think of the woman who circled the liquor store with a bottle of wine every night praying the evils therein would be cast out. And I kid you not, the store burned down. But then there's the woman who blessed the owners of the new bar in town every time she drove by, praying that God would enter their hearts. "Righteous" or right.

Then there's the woman who judges her neighbors because they are cohabitating and therefore won't have anything to do with them, while the neighbors on the other side form a relationship. "Righteous" or right?

And what about the woman who is at church every time the doors are open ... and comes home and serves roasted preacher to her family for Sunday dinner because he can't keep his son under control. While another young woman stays at home with her unchurched husband because he just wants a little time with her alone. "Righteous" or right?

And while we're thick into the "Merry Christmas" or "Happy holidays" quibble, do we get mad and hold to our guns that "Jesus is the reason for the season"? Or do we recover the reason and just DO the season?

Yep. Joseph might not have a voice in the story, but he sure isn't silent. He has a lot to say to each of us. 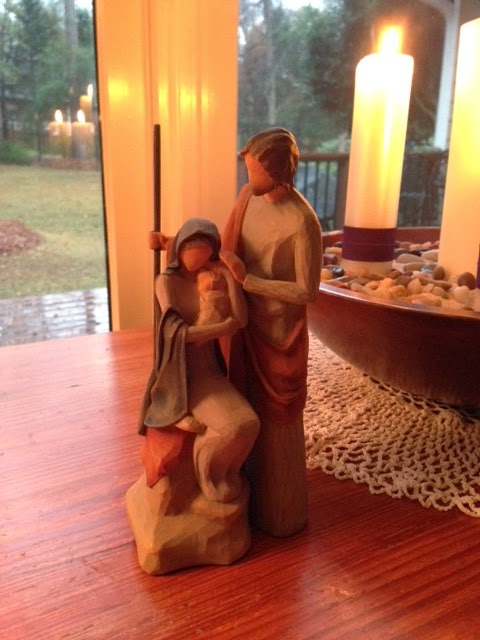 NOT From a Distance

I stood at the kitchen sink stirring the caramel icing to its correct consistency while the under-the-counter radio next to me played the season's songs. Not giving much thought to what was coming through the speakers, I quietly hummed along to the words being sung.

Yes, it was Bette Midler singing Julie Gold's, "From a Distance."Granted, much of the song's popularity coincided with Desert Storm. I get that. You can hear it in the 3rd verse.

And there are no guns, no bombs, and no disease,
no hungry mouths to feed.

I've heard and even sung this popular song for years, but every time it strikes a dissonant chord with me. Whereas the music industry throws darts at its lyrical content, its stiff rhythms and drums, I always cringe when Ms. Midler gets to the chorus.

I don't know, but that just seems to go against everything we are celebrating during this season of Advent and Christmas. After all, didn't the angel say to Joseph His name was to be Emmanuel? The With-Us God? Indeed, he did.

"Behold, a virgin shall be with child, and shall bring forth a son, and they shall call his name Emmanuel, which being interpreted is, God with us" (Matthew 1:23).

To say that God is watching us from a distance undermines the entire Christmas narrative of which this season shouts. The whole Gospel story for that matter.

And even as Jesus Himself says when praying to His Father just prior to His betrayal and arrest, "I IN them" (John 17:23). NOT from a distance.

In all fairness, Ms. Gold, the writer of the lyrics, says she believes in an immanent and beneficent God and that the song is about the difference between how things appear to be and how they really are.

So, yes, at times it appears that "God is watching us from a distance." But NOTHING, my friends, could be more untrue. Let's celebrate this season in truth: Emmanuel. God is with us!!!