Why I Had Children

[I make no apologies for this entry, but I do tell you right up front it is filled with pictures and thoughts from a still-smitten grandmother. I still encourage you to read to the end.] 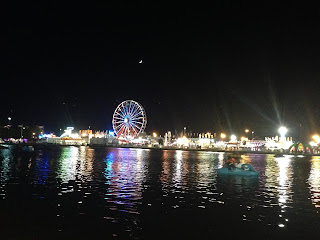 The Georgia National Fair is a huge event in the town where I live. This year saw a record of over 500,000 fair-goers. My husband, children and I have been attending every year's event since its inauguration in 1989 when Ray Stevens was the featured entertainer. Yes, our children have practically grown up riding "The Gentle Giant" Ferris wheel, feeding exotic animals and watching more circus acts than most people their ages can boast. But it's what we did; and what we still do.

However, this year was different. Of the 11 days that the fair was in town, our 4 year old grandson was here for the first 5 of them. What was really only to be a one day excursion turned into 5 days of fun; and, boy, what fun we had!

Each morning began with the little fellow sitting in my lap out on the deck in the Adirondack chair cuddled up in a honey colored blanket. Sometimes we would read, but most of the time we would just watch the birds. He got quite proficient at naming the "Go, Dog!" birds (a.k.a. cardinals) and telling me whether they were girl birds or boy birds. On more than one occasion, a flock of noisy geese flew over. I taught him one should not gawk heavenward when that happens but rather close his mouth. We watched woodpeckers and doves and hummingbirds among many other assorted feathered friends. And his belly laugh at the squirrels chasing each other around and around the tree was enough to make this grandmother chuckle out loud herself.

Before too long, the day was in full force and it was time for some fair fun and food. 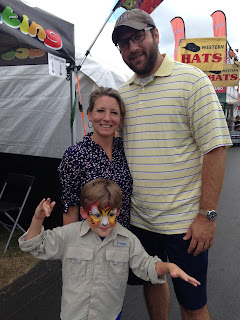 We also went to the circus, saw the pirate show, the magic show, watched the monkey show, the sea lion show and spent way too long in the building demonstrating to us the process of growing a chicken. We ate corndogs, hotdogs, hamburgers, chicken strips, roasted corn and funnel cake. And, yes, he and his cousin even danced wildly to Grand Funk Railroad's,"We're an American Band," as they played live on stage opening night. Yes, fun was indeed had by all. But especially by this grandmother.

The end of Day 5 saw our little man safely strapped into his car seat after having been kissed profusely and thanked a hundred times for coming. As they always do, his daddy rolled down the window so we could see him waving to us and so we could throw one more kiss. And as the Jeep was placed in reverse and began making its way to the end of the driveway, my grandson waved one more time and yelled, "Thank you, G-Nan! I loved watching the birds with you!"

And that, my friends, is why I had children.


Children's children are a crown to the aged.
Proverbs 17:6