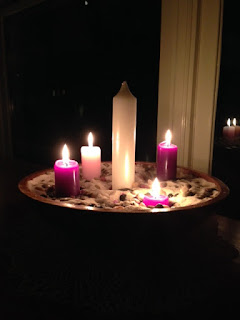 I often rise early and, when weather permits, find my place on the deck just out my back door. However, southern summer mornings can be stifling. "Muggy" is what we call it here in middle Georgia. But so often on those days, just as I would be about to give up and come inside, I would hear, "Wait for it." So I would settle down, and sure enough, there would come this moment when the "muggy" would lift and a change in atmosphere would occur in a matter of seconds. Morning after morning, I came to expect the same pattern: muggy, "Wait for it," cool. Until finally, it was not so much about waiting as it was anticipation.

This past Fall, I found myself sitting on the same deck, same chair, but this time it was dark on the other side of the clock. I had my head thrown back in my Adirondack with my eyes looking at the heavens. It was to be a stellar night for shooting stars. I was out there for what seemed like an eternity, but to no avail. No streaks across the sky. As I was giving up hope of glimpsing such a majestic occurrence and was about to come inside, I heard it again: "Wait for it." And so I sat. Quiet. Still. And just like the cool that replaced the humid summer mornings, I saw a streak across the night sky. And then another. "Wait for it." It became yet another a period of anticipation.

Waiting. It's not an easy task. Some do it better than others. Yet it's something to which God calls each of us. Not once, not twice, but daily -- and even then many times daily. Waiting makes us give into the illusion that we are not in control. God is. That He alone determines when suns rise and meteors fall. And a host of other things that cry, "Wait for it."

The Hebrew word so often used in the Scriptures for wait is qavah, which means to bind together (like twisting strands when making a rope). It means "to look patiently," "tarry," "hope, expect, look eagerly." When we are told to "wait" on the Lord, we can be assured it's not some perfunctory or cruel hide-and-seek game we are playing with the King of the Universe to come find us. No, He is working behind the scene, in full control, binding things together so that in the fullness of time, He can bring forth that which He has planned for us and the whole of creation.

The season of Advent is just that: a period of waiting. Of not rushing into the birth of Christ but of anticipating it in such a way that when Christmas morning does come, God has done a work not only in our circumstances but in us. Isn't that what waiting is all about anyway? Of being forced to be still long enough for God to do a work? Thinking back to those mornings and that evening on the deck, God was not going to be rushed in making the sun rise and the atmosphere to change. He was not going to tell the meteors to hurry on their path because I was tired of waiting. No, it was His timing. His work. Not mine. Both in creation and in me.

As I write, we have less than 12 hours left of Advent, this season of waiting. Yet, what really stretches before us is a lifetime of waiting. May we be encouraged to know that as we wait, God is working, binding ... even when we cannot see it nor Him. You can trust Him. So can I.

If He did not withhold His very own Son from us, will He not also give us all good things? You bet He will. Wait for it.