For years, my husband and I have had a "Dairy Queen Ministry." What this means is that we want a blizzard (for him) and a hot fudge sundae (for me) but we tack on "ministry" to justify our cravings. The owners of the establishment are Hindu, and after all, a relationship must be developed before sharing Christ, right? And maybe some advances are being made as our daughter text me one evening and said, "Mom, you know you go to DQ way too often when the owner recognizes and speaks to you in Wal-Mart!" It also has that "Cheers" feel in that when they see us walk in the door, they just go ahead and start putting the Butterfinger pieces in the ice cream cup.

And so last night it was only natural that after our Ash Wednesday service we head to the Dairy Queen. This was a tradition begun when we use to attend the service in Savannah. We would stop by Krispey Kreme Donuts for a "last meal" so to speak. It was always a little awkward walking in with ashes on one's forehead, but we were quick to learn we weren't the only ones getting that last sweet in. But since there's no KK close by, we've opted for DQ and it has worked just fine.

But after making the casual conversation with the owner and while waiting on our treats, my husband and I both noticed the man who had walked up to the counter and tried to order. There was definitely a problem with his speech as he couldn't seem to articulate what he wanted. He left without ordering. My husband and I took our seats in a booth, and moments later the man walked back in the door and straight to my husband. He handed him a $20 bill and said, "Will you order for me?" At this point, all eyes had turned in our direction. We were both still very aware something was wrong, but my husband stood up and said, "What is it you would like?" After numerous attempts to get it out, I was finally able to interpret "Crispy" and said, "Chicken?" He nodded, and so my husband went to the counter while I sat alone eating my sundae with the man sitting down in the booth next to ours. I have to admit, even though almost every table was full, I was still somewhat uncomfortable and eager for my husband to return. When he finally did, he gave the man back his change and told the fellow his food would be ready shortly and that he would get it for him when it was. So as we waited, I continued to eat my sundae, but the man seemed eager to apologize to my husband for the inconvenience, and telling him how sorry he was, he stuck out his hand to shake my husband's in gratitude.

Upon receiving his food, the man was able to convey that he wanted an ice cream. And so after some careful interpretation, my husband was able to discern "blizzard." Upon ordering and handing him that, I watched the most beautiful moment take place as my husband placed his right hand on the man's left shoulder, looked him square in the eyes, talked to him as a friend talks to a friend, and then asked, "Where are you staying? Would you like for me to help you get home?" to which the man nodded yes. I don't think I've ever witnessed the hands and feet of Jesus more than in that moment as my husband gave the man such dignity and worth.

By this point, there was no doubt the man was extremely intoxicated, but the depth of hurt in his eyes and the look of humiliation and sorrow on his face erased for both of us any condemnation. My husband locked arms with him and off they went: one steady, the other staggering. I quickly asked, "But where are you going?" And he said, "Wherever he takes me." I got in the car and followed behind until they reached the motel two doors down the road. My husband saw him safely to his room, instructed him not to leave for the rest of the night, and returned to where I was waiting in the vehicle. Both of our hearts were heavy as we pulled out of the parking lot.

Only an hour earlier had we sat in our sanctuary and, before receiving the imposition of ashes, heard the words spoken by the pastor about dying to oneself. About the cost of discipleship. About walking this journey with Christ with intention. About sacrificing that we might become more like Christ in His sacrifice. Lent. It's the preparing of the heart for Easter.

"Where are you going?" "Wherever he takes me." Yes. Dairy Queen ministry. Through my husband, it all began to make sense. 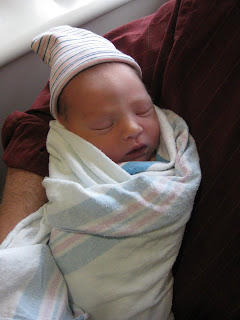 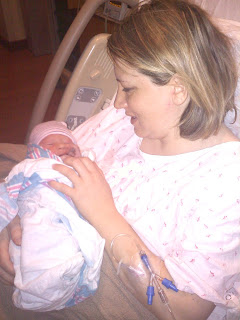 Mom and baby shortly after delivery. 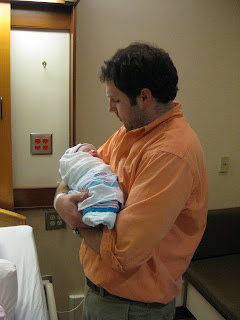 A surreal moment for this mother: seeing her "baby" hold his. 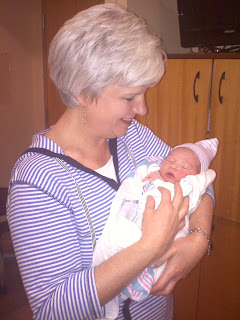 Holding my grandson for the first time. 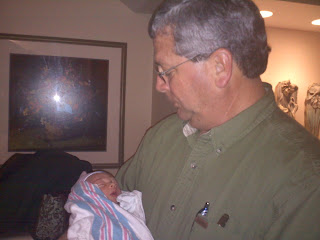 Getting acquainted with grandpa Geezer. 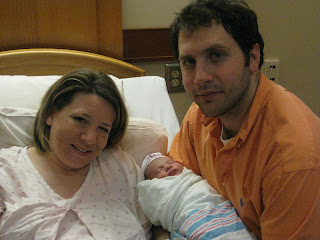 The new family. A cord of three. 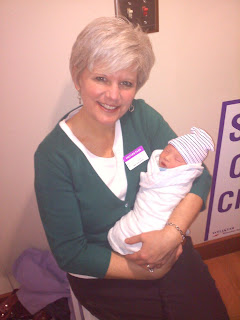 3 hours of sleep and back to do it again. 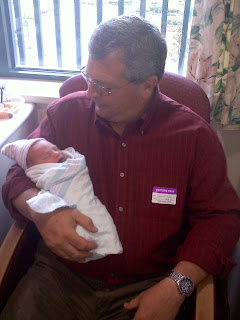 It was difficult sharing -- but I did. 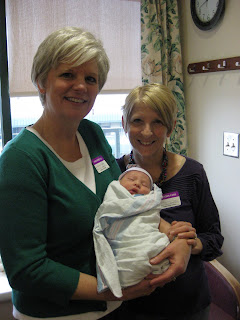 The proud grandmothers and love multiplied. 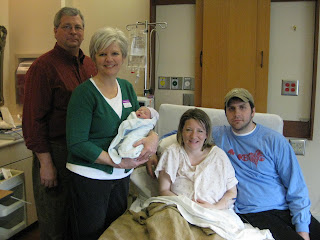 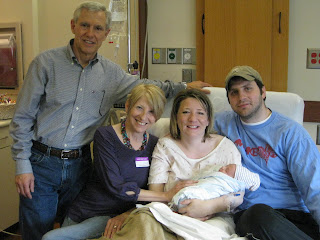 May He grant you according to your heart's desire,
and fulfill all your purpose.
Psalm 20:4